"POLICE HAD TO ACT — PM
…to stem rising tension

KUALA LUMPUR, Wed. — The Prime Minister today said that the police had to detain 63 people under the Internal Security Act in order to defuse racial tension that had reached a dangerous level.

He said the actions of politicians, mainly from the DAP and PAS, individuals, newspapers and magazines had created tremendous racial and religious tension in the country.

“The police felt the situation was dangerous for the country. I agreed with them that we could not wait for riots to break out before taking action. We had to make immediate steps to prevent riots and save the country from eventual danger and disaster.” he said when addressing the Dewan Rakyat.

In the afternoon, another eight people were announced as being detained under the ISA. They included UMNO Youth exco member Fahmi Ibrahim and DAP lawyer Wee Choo Keong.

Datuk Seri Dr Mahathir Mohamad said since he took office in 1981, the Government had avoided imposing too many restrictions on Malaysians and actions which could create racial and religious tension.

He said certain people and groups, particularly the DAP and PAS, had abused the Government’s liberalism by playing on racial and religious issues and creating unnecessary tension.

“The country cannot afford racial riots. We are facing an economic recession and many of our people are unemployed.

“If the recession is aided by an unstable political climate, the country will be in chaos,” he said.

It was to prevent such chaos that the Government took action, he said.

“We have all agreed on the special position of the Malays and the rights of citizenship for non-Malays, including Indians and Chinese, who have chosen to be citizens of this country.

“We accept Islam as the official religion but also guarantee religious freedom for others. We have agreed that Bahasa Malaysia is the national language but other communities have also the right to use their own language.

“This agreement must be respected by all. It cannot be questions by anyone. If there are any groups which question these rights, the country’s stability would be threatened,” he said.

“I appeal to all Malaysians to cooperate with the Government to ensure unity and understanding among various races. We will not hesitate to take action against anyone who tries to create chaos,” he said.

“Referring to his term of office since he became Prime Minister in 1981, Dr Mahathir said:

“We released many of those detained before 1981. We approved more publishing permits for newspapers and magazines and allowed them to publish reports and features previously regarded as instigative.

“Cultural activities previously banned were allowed as were seminars, gatherings and rallies. Political, social and professional groups freely made baseless accusations and allegations of racial nature against the Government.

“We though Malaysians were mature and did not require restrictions. We thought they realised that development and property of the country depended on peace and stability.

“We still remember the May 13 incident. There are amongst us who do not want a bloody incident to recur. Therefore, irresponsible actions and provocations should not have occurred,” he said.

Dr Mahathir added that police who had been monitoring the situation, felt that there was certain people who did not appreciate the Goverment’s liberalism.

“They created sensitive issues without regard for the consequences. The DAP, especially, always played up Chinese and Indian issues. They paint the Government as one which oppressed these races,” he said.

Dr Mahathir said besides using racial issues to gain support, the DAP also denounced Chinese and Indian based parties in the Barisan Nasional for not standing up for their communities’ rights.

“Because of this, the Barisan Chinese and Indian parties raised more racial issues than the DAP to prove their strength,” he said.

He said among the issues raised were lion dances, co-operatives, signboards, the Chinese language, Bukit China, the pledge for school children, elective courses in the University of Malaya, the position of Bumiputeras and pribumis and the Chinese school issue.

“One of the most dangerous things was to use a temple to have a racial gathering,” he said.

Dr Mahathir said many provocative words were said when discussing these issues.

“The Malays reacted to these words and even went overboard. All these were reported by the mass media which became even bolder in fanning racial feelings. Some newspapers and magazines deliberately added words to spread tension throughout the country,” he said.

“At the same time the pro-Communist factions took advantage and provoked people through legal and illegal bodies. There is evidence that they received material and moral aid from countries which do not want to see us in peace and prosperity,” he said.

On religion, Dr Mahathir said some PAS leaders not only tried to divide the Muslims, but also instigated them to have Christians by making baseless allegations.

He said PAS leaders claimed apostasy was increasing rapidly among Muslims and that Christians missionaries were converting more Muslims.

“In general, the churches in this country are very sensitive and do not preach to Muslims. There was only one church which unsuccessfully tried to convert Muslims. They managed to convert less than 50 people,” he said. 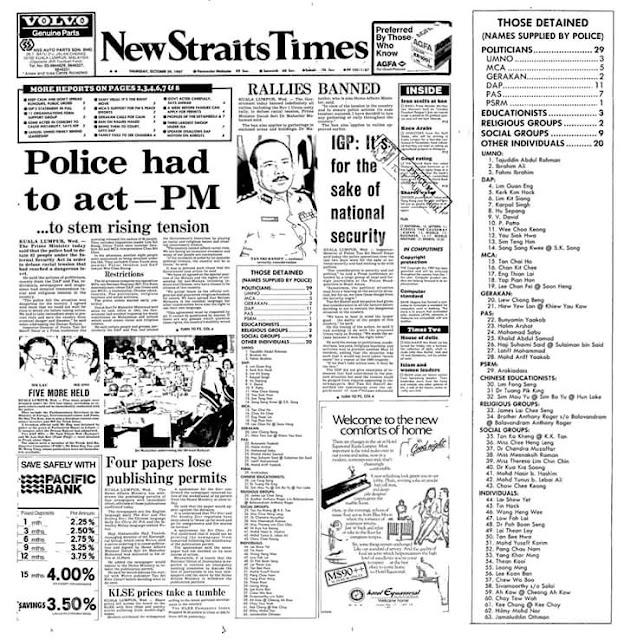